I’m going to the end of my tour and doubling back, because this is about writers and readers, and when I got to Halifax I was met by one of these writers, Janet Barkhouse, who writes poetry and children’s books. Her latest had just come out, called Keeper of the Light. It was exciting being in on this new book at its early going-out-in-public stage. Among the best things about this book are the main character, a young girl who takes care of a lighthouse in an emergency in the early 1900s… and the illustrations by Thérèse Cilia, but most of all the writing. It’s available from the Formac Publishing Company in Halifax.  When I saw it, I needed to have a copy immediately even though I don’t have children. I’ll read it to grandkids when they visit, but for now, it’s MINE.

Here I am being met at the airport, feeling like a queen with my own papparazza, Janet.

For I was certainly treated like a queen byJanet and Cynthia and Les. Les carved a chicken raised by Janet that could be entered for plumpness in the Guinness World Records. A gigantic succulent fowl beautifully prepared by Jan’s husband Greg.

Other Nova Scotia highlights were the market in Mahone Bay, a Market among markets, full of food and colour and activity.  A handkerchief skirt/boots outfit that appealed to me, 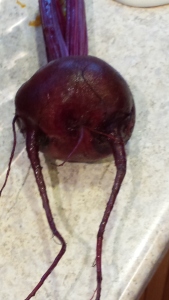 We revelled in Lunenburg’s bookstores, basked in the weaving of Marrie Berkelaar in her shop called the Double Whale.

and had lunch near the harbour where the Blue Nose was.

A little out of order here, but my reading at the Margaret Hennigar Public Library in Bridgewater was a dream in every way. So many people had put their hearts into its organization and into publicizing it. Jan Barkhouse was wonderful, the spearhead, and all the seats were filled. Timothy Gillespie promoted and attended. It was a delight to meet him. I met people who had connections with Labrador, with Arctic Twilight, with so many of the concerns that Leonard Budgell had. Valerie Hearder was there, a photographer who had taken one of the pictures I used found in Twilight. She did some work at Them Days oral history magazine and I found the pic in their archive in Goose Bay …I answered questions afterwards, signed books, felt wonderful and complete and Leonard would have been so happy that so many were there. A little side story: I was hosted in Whitehorse by Gail Roberts and her husband. The lovely lady in the photo below is Gail’s sister!!!

So much happened in Nova Scotia. I have to tell myself that it’s impossible to say everything I want to say in one post, but on Saturday, Cynthia drove me and Jan to the Luckett Vineyard on Grand Pre Road in Wolfville, or Grand P R E as the GPS has it, and treated me to wine and lunch and dessert and views that are superb.

British red phone booth in the middle of the vineyard and anyone can call anywhere in the world for free. There were tiny red pickled peppers and Jan bought a humongous jar of them to add to Cynthia’s pantry. It was beyond wonderful, and the trip through the leaves and through pumpkin displays almost sent me over the top. Over the top was picking up Basma Kavanagh and taking her home with us!

When we got back to Cynthia’s at Church Lake, E. Alex Pierce joined us and we had a glorious dinner and pyjama party, sort of, feet up, glass of wine, good talk, things like that… Heaven.

On Sunday we were joined by Carol Laing, artist and writer

for brunch and for a writers’ meeting. It was grand, all so grand. More talking and talking poems and talking prose and life and cabbages and queens. Next post I’ll go backwards again, talk of Fogo and readings and all the small things that make up life.