“…Len often argued that the Arctic is the most beautiful place on earth, despite the barren, stagnant perception it has suffered from. In his descriptions of a walrus breaking the surface, or of an osprey soaring in the skies, Len really brings this beauty to the reader, convincing us that he is right in thinking so.

While the stories found in these letters are often gripping, it is the beautiful, whimsical nature of Len’s prose that really sets this book apart. Even the simplest of circumstance is given the most evocative of stylistic treatment, turning the ordinary into the extraordinary. For example, when describing Montreal in winter, Len says that “Montreal wept all the while. She was grey and foggy and her streets were dripping. She had nice white petticoats on Mount Royal, but her downtown linen was soiled and she hated it.”

He was as precise in describing the men and women he grew up with, trappers, ship captains, the men and women at the trading posts and small communities or in the ‘bush’, as well as on the ships he worked. Here, in short, is John Blake:

And John Blake, the one-armed skipper of our little schooner. He could do what any other man could do, including go aloft in the masts. He could square a lot as true as any man using only his one hand, which handled that heavy broad axe like a chipping hammer.

Len knew how to tell a story, and he tells this one about his canny father, and John Blake who also trapped. Both Leonard and his father admired the trappers who came to Rigolet and North West River, and felt they should get their due. Here you can see how his father George, the Hudson’s Bay Post Manager, could do some setting up of his own:

Once I remember a trapper who badly needed the money, who came in with a choice silver fox when the price was a thousand dollars or more, before the fox ranches. Looking at the skin, my Dad discovered that the ears were tainted. The fox had been buried in snow and so preserved, but the ears had projected above the snow and it was a bad case of fur slip. My Dad told the trapper that the damage would discount the pelt quality, and advised him to hang on to the skin till one of the travelling fur buyers came by. (fur buyers who were in competition for the furs.)

One did, quite soon, and as usual he came to our house. At supper he spent a lot of his time telling my Dad that HBC traders were too conservative, scared to risk exceeding their tariff. He said, “I can buy any HBC man under the table.” So my Dad sent a note to the trapper, told him to bring his fox to the house and ask for the travelling buyer.  When the trapper came, my Dad pretended to be surprised and demanded a chance to value the skin.

Of course, Len’s father, pictured below, outwits the travelling fur buyer. The full story is in Twilight. 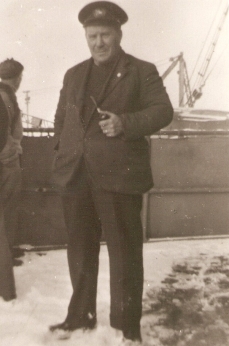 As to the Bill Cobb whose name you can see in the handwriting photo above, here he is, more completely, as the story appeared in the manuscript. You can see how Len was able to portray character in a few words, and how well he could remember the exact words of a conversation:

Blair Fraser, who was an editor of Maclean’s Magazine before it became an echo and a copy of Time, came to Sandy Lake once. He stayed with us and remarked that Canada seems to have a record of fifty years of trying to get rid of the native population by neglect, then fifty years of trying to get rid of them by overindulgence. He was accompanied by Bill Cobb of Hudson’s Bay Co.  Bill was a clerk with my Dad when I was a little shaver. He’d been around among natives for years, and so had I.

Fraser, when he first arrived, was a real white man. As he said, he felt like an evangelist when he came to places like Sandy, we knew so little of what went on outside. And he discussed Indian Affairs and the people he knew in the department and what they planned. All the while I could see Cobb’s neck get redder and redder and I knew that mine was too.

Fraser, who was no fool, stopped talking and said, “Do I feel a resistance to what I am saying?”  The dam broke and we hammered the poor man unmercifully, he whose weekly political broadcasts were listened to by thousands of Canadians. Finally when he got a chance he said, “Could I, could Ottawa, be so wrong?” and I’ll never forget that Cobb said: “If you live for forty more years you will see just how wrong you are. You will see the destruction of two ways of life, two native peoples, in that time.”

The story happened sometime in the 40s or 50s. Bill Cobb knew then what was going on. He and Len saw what was happening to the native peoples they knew and respected. It broke Len’s heart as the years passed that the damage was not being rectified, or even acknowledged. In some ways it is good that he is not around to see how little has been done to ensure that aboriginal people in Canada can lead the lives they deserve.

Here is a photo of Leonard Budgell at eighteen. He has just been officially hired by The Hudson`s Bay Company at Cartwright, Labrador. Son of a Hudson`s Bay Post Manager, unofficially he had been behind the counter in Northwest River and Rigolet since he was about ten.

Len was extremely shy and several of his letters tell of experiences when he was behind that counter that would have him blushing furiously. Usually a young nurse would be involved, asking the boy for something like a pair of longjohns. At other times he drove nurses and doctors by dogsled around to the tiny Labrador communities. A storm would arise, and shelter found in a tiny trapper`s tilt. The nurse of course, not properly dressed for Labrador storms, would be wet and cold, and Len would be caught. Once her clothes were off and drying, what to do…

Len would go on to be a Servant of The Bay (his favourite term) for many years in Northern areas. Where many men might remember, and tell or write of these experiences, Len just happened to be an incredible writer. His stories have us laughing or crying, connecting, learning or laughing. Want to read some wonderful things about the sea, or animals of the North, or the natural abilities of native peoples, or whales or seals, or owl eggs, go to Arctic Twilight: Leonard Budgell and the Changing North (2010, Blue Butterfly Books-Dundurn Press).

In The Globe, Michael Crummy called Len  the greatest writer on the North that he knows of. Mr. Crummy credits Len`s writing about boats and engines in his own novel, Sweetland.

I miss him very much. Leonard died in the year 2000, but his words will be here for a very long time. For more about Len and Arctic Twilight, you can to the Archives, and the June posts.