As Jane Hirshfield makes us aware in her book Ten Windows (2015, Alfred A. Knopf, New York), just as in American poetry, between the early 1950s’ formal meter and rhyme and the late 70s use of language akin to the abstract expressionist use of paint, there have been revolutions by the Beat poets, the confessional poetry of Lowell and Plath, and the “deep image” poetry of Robert Bly, in Bashō’s lifetime poetry went through transformations oddly parallel.

Within his writing journey, he used sudden loosening of language, taste and subject matter through to a poetry that was quieter of surface and more inwardly centered. Bashō variously wrote haiku that advocated wordplay, transgression, and haiku that turned on well-known classical works. He wrote poems using simple everyday language and imagery that used humour and earthiness, and in his mature poetry, came to prefer poems of “lightness.”

All forms of Japanese poetry continue to go through similar changes, a natural part of poetry’s life, keeping it vibrant. This includes the haibun form.

In the Poets Online blog, there is a piece about Jeannine Hall Gailey and her collection of haibun, She Returns to the Floating World, in which she explores motifs in Japanese Folk Tales. Though the poems are based on traditional content, they are ultra modern in form. Her poems are spoken by characters from mythology, fairy tales, animé and manga.

The blog also features poet Aimee Nezhukumatathil who has written several articles on haibun. She admits that she is “not one to stay close and straight to any particular poetry ‘rules’ (the haibun form especially and brightly lends itself to experimentation if one desires).”

In the current volume, Volume 9, of  Haibun Today, a quarterly journal online, with its founder Jeffery Woodward as General Editor, Juliet Wilson of Scotland writes of ‘Night Fishing’ in a purely objective, haiku-like manner , Lynn Rees of England reviews Ethiopian Time by Bob Lucky, offers a haibun from the collection called ‘Dead Cat’, and a well-thought-out piece by Guy Simser of Canada called ‘Dilly-Dallying Over a Drying Creek Bed’, complete with references to being taunted by Dali’s waxed moustache.

In A Hundred Gourds: A haiku, haibun, haiga & tanka poetry journal (online) Mike Montreuil , editor of the haibun section, has published a haibun by Marco Fraticelli about a dream in which he is Suzanne telling off Leonard Cohen for what he has done to her by writing the famous song, along with the dream Leonard justifying its writing. Lynn Edge of the United States writes of being bored enough to watch The Batchelor on television.

All of the above are interesting, well-written, absorbing haibun in contemporary mode; little of the prose is deeply emotional, or about travel, or life story although the volume does include several of these.  But because haibun is poetry and poetry has a life, it continues to be innovative and must risk veering from the traditional forms.

This is not always appreciated. In the current volume of Haibun Today, June 2015, Ken Jones of Wales, former co-editor of Contemporary Haibun Online, is concerned about the current shift in haibun styles.  However these new styles do exist and are being accepted by excellent editors.

The best way to keep up with what is happening in this particular form is to bask in these online forums. You can also keep up with what Bashō might be writing if he were alive today, as A Hundred Gourds and other journals have a wondrous selection of modern haiku and all Japanese forms. 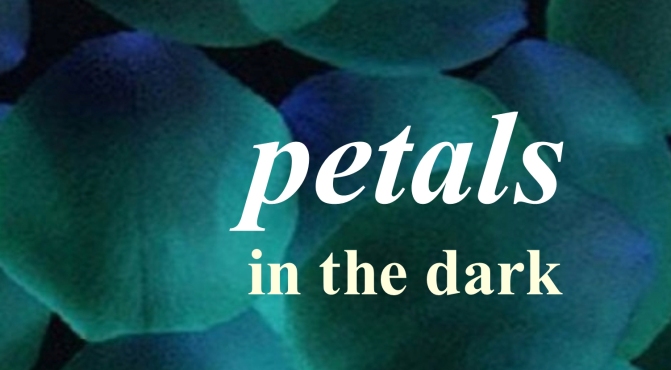 Piaget insisted on the value of play in learning, and many of us stop playing, except for cards or sports, with other adults. Enter this poetry form, and Marshall Hryciuk’s first collection of what happens when poets decide to play together.

Petals in the Dark is an collection of verses by poets all over the world, linked and shifted, and guided by Marshall Hryciuk in the position of renku master. That sounds formal, and some forms can be. But to be part of a renku led by Marshall is to feel simply very alive, intellectually, socially, and creatively. For years he and his wife Karen Sohne have created poetry parties noted for a certain wild abandon, but an abandon that includes everyone, anyone who is ‘game’ to participate. It is truly a party.

I love this photo of Marshall, taken at Versefest 2015 as he was guiding a varied group of audience members, some who had done renku before, and many others who were new to the genre. Nevertheless, everyone got into it, and the party was a fine one. The Japanese sake was fine too.

It’s amazing how quickly participants begin to move as one, like a flock of starlings; there’s a movement, suddenly the poem can go one way, and in the next verse, go somewhere else, all the poets interacting. Everyone is on the same side in this game, everyone wants to win, and the prize is a completed renku. Some writers think and work quietly, others get excited, competitive and rowdy while the parts of the renku are busy forming the whole. At Versefest it was no different― there we were all scrambling to write the next verse.

In the introduction to Petals in the Dark, Marshall writes: “…renku would be, under Basho’s tutelage, poems about what was happening, here and now, for, and by, these not-so-refined merchants and travellers who wrote in their everyday clothes in their everyday surroundings.”

In this spirit each renku begins informally. There is a feeling of ‘Come on in, how are you, I’m so glad you’ve come. Tell me about yourself. Have a drink. The food will be ready soon.’ It is a recognition of, and welcome to, each person at the party, an assurance that the host, and everyone else, is interested in who you are, and wants to make you comfortable. One strength of this form, as Marshall indicates, is that a renku is: “…a poem that has a consensus of differing perspectives and personalities expressed and yet contained within it. Backgrounds, literacy and poetic competency are not as important as doing it… committing poetry, showing that poetry is one of the joys of life…”

Committing poetry, then, and committing poetry as a group as well as separately. While the poem is a group party game, each person gets credit in publication, or in a reading, for their own verses. There’s a feeling of a release in a zen-like way; each poet letting go, giving in to fate. The poem will go where it will go. There is nothing anyone can do to plot its course, for:  “…. participants are blind to even the possibility of an overall theme…you learn to avoid cause-effect writing that is the backbone of plot…the dramatic withholding of a secret, together with re-definition, restatement and conclusive appraisal…”

Pivotal is this ‘waywardness’; no one has any idea of where the poem will go, but it might be a good idea to remember where the poem has been as there is no point in repeating what someone has already said. This can get complicated after a few glasses of sake, or brandy, or wine. But it’s a wise poet in any genre who allows room for a poem to make itself.

“Within a renku a…writer can lose her or his predilection for prediction and delay….there is no linear development.”

And so the party continues, guided but not fenced. It should, as mentioned above, include ‘what is happening here and now‘, the headlines and concerns of all world citizens, what kind of coffee you had this morning, the colour of your socks, feasts and festivals, flora and fauna, books and movies, right down, or up, to the whole universe and beyond. It is just so damn much fun for us everyday travellers in our everyday surroundings!