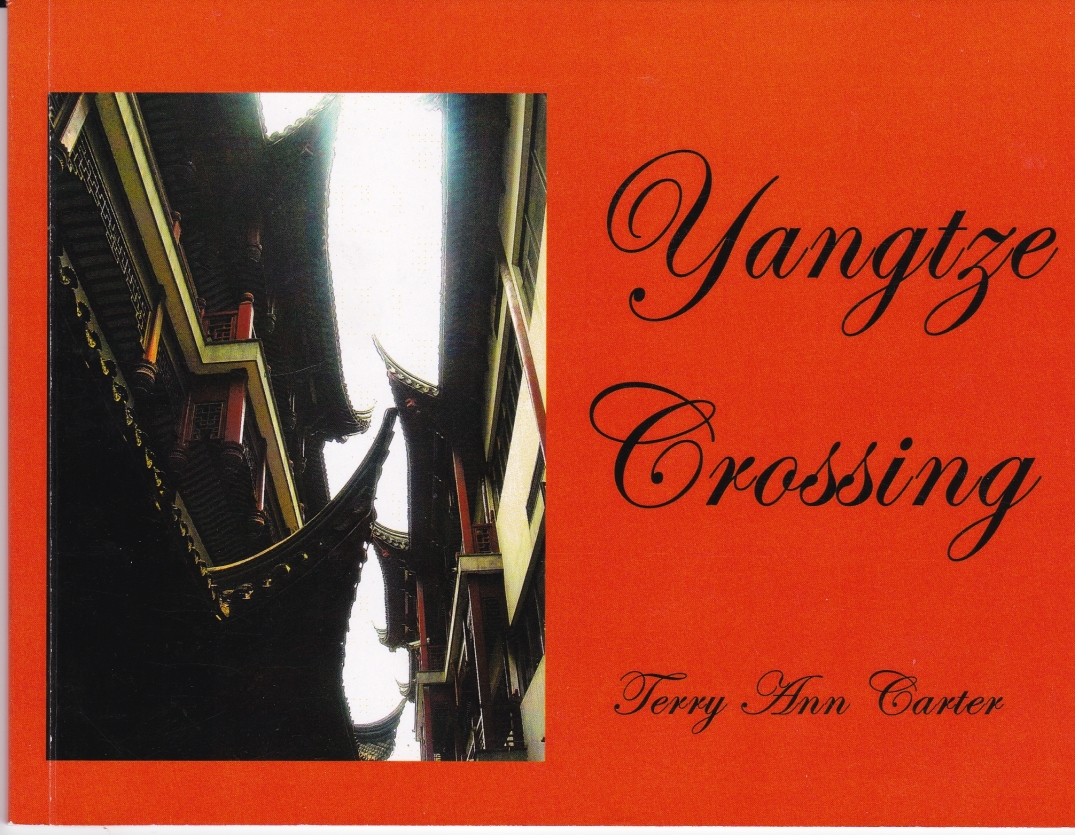 In 2005, Terry Ann Carter accepted an invitation to teach at the International Educational Exchange Center at Dongzhou Middle School in Haimen City, China, a Summer Language School for Teachers. She suggested we do this together. We both found the five line Japanese form of tanka to be the best way to express our experience.  We published a set of chapbooks. Yangtze Crossing is Terry Ann’s collection. It takes you through her second trip to China, and my first.

In this poem Terry Ann Carter sees herself, a modern women from Canada, on a ferry in China in a country of millions of women whose ways of life we cannot possibly understand.  Initially the poem speaks of the natural astonishment of being in China at all.

It is an adventure to cross the Yangtze, though today there is a bridge where we crossed to Shanghai from the north. The photo shows our chauffeur (yes!) waiting for the ferry beside our Mercedes (yes!!). Blame it on the heat and humidity, and/or being driven in China by a chauffeur in an air-conditioned Mercedes, but there was a sense of unreality despite the closeness of truck beds on the ferry loaded with piled cages of chickens, despite the small girl hiding bashfully in her mother’s skirts from the white devil ladies, leading to connections less concrete than what we saw around us, those of myth, poetry, and history.

The muddiness of the water and our muddy relations with this country, mud by the shore, too polluted even for reeds to grow through the trash washed up in the estuary.

Terry Ann Carter was also a different person than she was when she first came to China many years before.  Like the clouds, her mind was unable to settle for long on what her senses were telling her. There were so many changes, yet so much was unchanged.

Both Terry Ann and I, like children, wanted to believe in the China of poetry and Art, of beautiful clothes and elegant manners, not the condition of those hundreds of pathetic chickens in the heat.  We could only look up, where the clouds were drifting, unconcerned. Of course, clouds do not float ‘in no particular direction’, except that here on the Yangtze, with everything coming at us at once, they seemed to.  The line could suggest the opposite analogy, that in China there is only one ‘correct’ direction, but that there is a feeling in the New China that anything is possible.

This is how we knew we were in China.  After all, we’d been picked up by our chauffeur from the Shanghai Airport, whisked to Haimen City on a many-laned highway. In our separate rooms, we had a bed, desk, computer to use, and air conditioning, modern bathrooms and showers. We were teaching in a secondary school and had at our disposal up-to-date classroom equipment.  The giant department store on the corner had just about everything, except yogurt and eggs…

But to hear in the evening this pipa music, a fellow teacher who was a student of this ancient stringed instrument, going over certain groups of notes, honing melodies, was for the moment, our China, the China of a small city.

The flowers spilled, like the notes, gracefully.  The vase, a container of water, a symbol for the physical body containing a spiritual life, as the music ‘contains’ life for the spirit.

The poem is a reminder of our students, teachers themselves, with us to improve pronunciation of English, and to learn new English Language teaching methods. There is a vase, containing, limiting the amount of water which is transparent and easily poured away, easily lost, a lesson, sign of what is possible and not possible, a structural discipline. That much water in just that form. 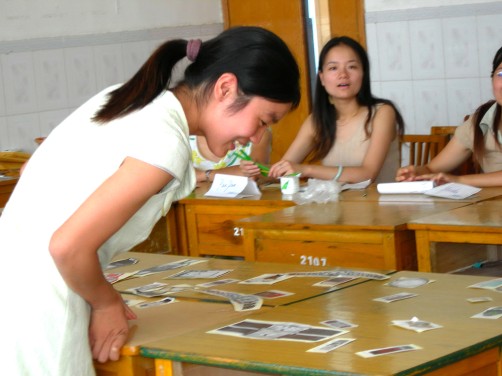 It could be analogy for obedience and discipline, a ‘holding in’ first and foremost for Chinese students and Chinese teachers, for all Chinese citizens. Rules, philosophies and laws are cultural containers. This tanka is our friendly Director checking all my photographs before I left, is our students always wary of telling us anything about their personal lives, their families, or their teaching situations, and knowing that to exchange email addresses may be useless at best, if not dangerous. Vase as caution, solid and in a recognized shape. 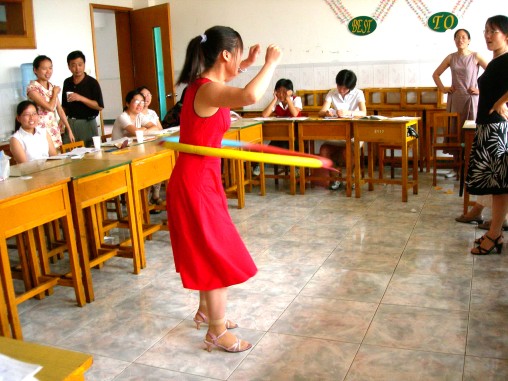 The evaluation comments from our students were delightful and positive, and I’m sure they had a good time learning from Terry how to practice phrases while keeping a hula hoop going, or from me how to make collages and create stories and conversations about them.

But just before we left, a shy teacher came to me and thanked me for the new methods, but said none of them would be able to teach that way; they were told precisely what to teach and how to teach it, mostly by forced repetition and rote memory. If their students did not pass their exams in the manner expected, the teachers could lose their teaching positions. 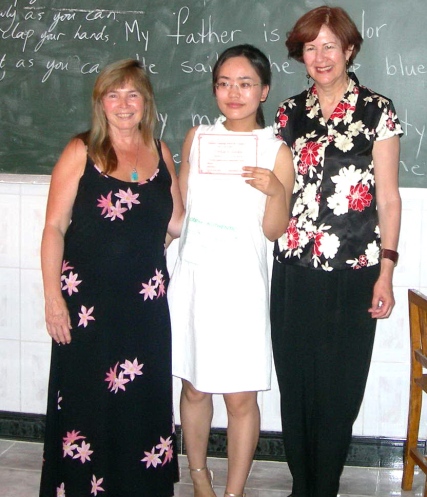 This tanka, with its dreamy mood, is accessible however to anyone who does not know its background stories and/or associations. It is everyone’s memory of walking past a house, and hearing through an open window, someone playing Mozart on the piano, or someone practising something beautiful anywhere.  It leads to recollections of picking our own wildflowers in an empty lot, or in the country, or of stopping the car to choose a bouquet from the side of the road, or even wondering whether Chinese wildflowers are different from ours.

The next tanka is in a similar dreamy mood:

I don’t know what particular plant Terry Ann was looking at in her home garden, but what was uppermost in her mind was not the plant’s name, but the shape of its leaves. This is one way memory works, a kind of synecdoche, a ‘part’, in this case a shape, bringing to mind a ‘whole’, not even just a whole object, but a complete scene.

Moon gates are almost cliché when thinking of China; every temple, every garden has one, and anyone having read or experienced anything to do with China, can’t help but having somewhat romantic feelings about them. Romantic is not completely the right word, but these gates in the shape of the moon and ouroboros signify myth, story, and mystery ― rabbits, the goddess Chang’e, moon as female principle (Yin), even the Good Night Moon storybooks we’ve read to our own children. 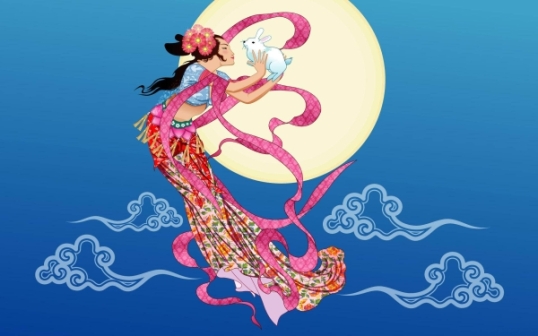 Leaving aside our customary association of romance and moonlight, the romance in this tanka is in the delicate sensual phrasing of ‘summer night’ ‘fanning’ and ‘against the skin’. We are ‘touched’ in a metaphysical way, not quite physically touched, but as if our skin were being brushed by the summer air, a sense experience, a relationship between sense impression and its referents. In religious rituals relics are touched or kissed. Masons recognize each other by a handshake, Pygmalion had to first touch the statue in order to be moved.

‘Air’ has fanned against the poet’s skin, and she has made it touch ours ― touch as index to consciousness.  In this poem, touch is positive connection with memory, and with some things we already deeply know.

Here too is a physical structure in the form of not the moon itself, but what is outside the moon, the moon’s halo. It has given us a circle around emptiness, around what we don’t know, the art of knowing nothing.  It can be linked to the summer air, which we can’t see, but which we feel; nor can we see emptiness, no mind, the innocent mind, where it all begins and ends, but we can sense its truth, its essence.

To read Terry’s Yangtze Crossing is to give us an intimate picture of some aspects of Chinese culture ten years ago. Our students, the director of the Center, the secretary of the school and the principal were so warm and welcoming. 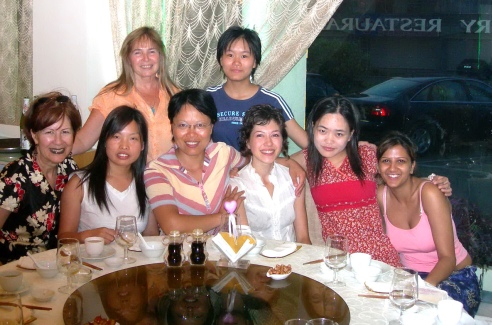