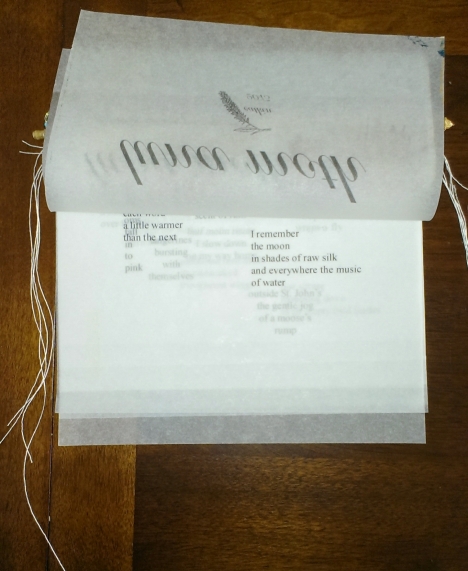 Every once in a while I get an idea for a book that takes way too long to make, but I am stubborn, so I decide to make it anyway.

I was gifted (thank you Terry Ann Carter) a stack of odd-sized tissue-like paper and it has been simmering in my mind for a few years. My commercial printer could not print on it, so if it would be a book one day, it was up to me to print the pages on my home printer.

I am glad that I began five months before the conference in Schenectady where it was to be on the book table.

There are not many pages; it meant putting each of five sheets of paper into the printer twice. I won’t bore with the whole tale, but some of the lowlights were having the printer jam several hundred times even though I only made 17 copies of Luna Moth. I ran out of ink, and had to print a couple of pages twice (four passes x 17 pages through the printer) because I found errors and wanted perfect books. Besides that, each time I printed a page, I had to print it as a single copy. If I could have demanded that my printer simple print say, 10 copies, that would have been much too easy. Trying this was not clever as ten or twenty pages would stick to each other, bound and determined to go through the printer together. So for each pass-through, I had to give the system four separate commands. That would be, let’s see, about eight hundred individually printed pages, or 3200 commands. I may be exaggerating, but only slightly.

Then I assembled and sewed the pages with my sewing machine, which wasn’t too pleased with working on paper and retaliated by not ever giving me a perfect tension. Three rows of stitches for each book, leaving the threads long, in a kind of tassle effect. The I was ready to insert dried fake bamboo touched up with gold paint through the sewn channels, so that I could put gold ‘thread’ hangers on these hang-up books. A couple of turquoise beads to anchor the threads. A snap.

But the grasses didn’t all fit through the sewn channels (I had to hunt for some more svelte members of the fake bamboo clan), the threads were finicky when I was fitting the end loops over the grasses, the beads were upset at being stuck down with a glue gun…they kept jumping from my fingers in revenge, arranging for said fingers to get burned by the hot glue while I fumbled. But the results are worth it. Here are some poems from Luna Moth:

after rain/ a rinsed light, over the hills

milkweed blossom monarchs fold into each other

Now I embark on another of the same kind of mission. I’ll use the same transparent paper. It will jam the printer. But I’ll feel great winning a few battles with my technology. Won’t I?